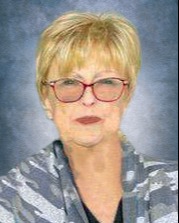 Sarabelle worked as a cost analyst for O'Sullivan Industries for 31 years and also worked as a telephone operator for Southwestern Bell. Sarabelle also worked for Missouri Child Support Enforcement in 2010. Sarabelle was very enthusiastic about the Kansas City Chiefs and St. Louis Cardinals. Sarabelle and Steve loved to go camping and spent most of their summers outdoors. They were incredibly thankful to get one last trip in before her passing. She loved to play the game "Joker" and was very competitive at family functions when they would play. If you were to ask anyone, Sarabelle was the best cook around. She loved spending time with her grandkids and great-grandkids, as well as attending their sporting events, no matter how far the drive. She was so proud of each and everyone of them.

Sarabelle was preceded in death by her parents and one son, Steven Nicholas DeWitt.

The family will receive friends starting at 10:00 a.m., until service time at the church.

To send flowers to the family in memory of Sarabelle DeWitt, please visit our flower store.